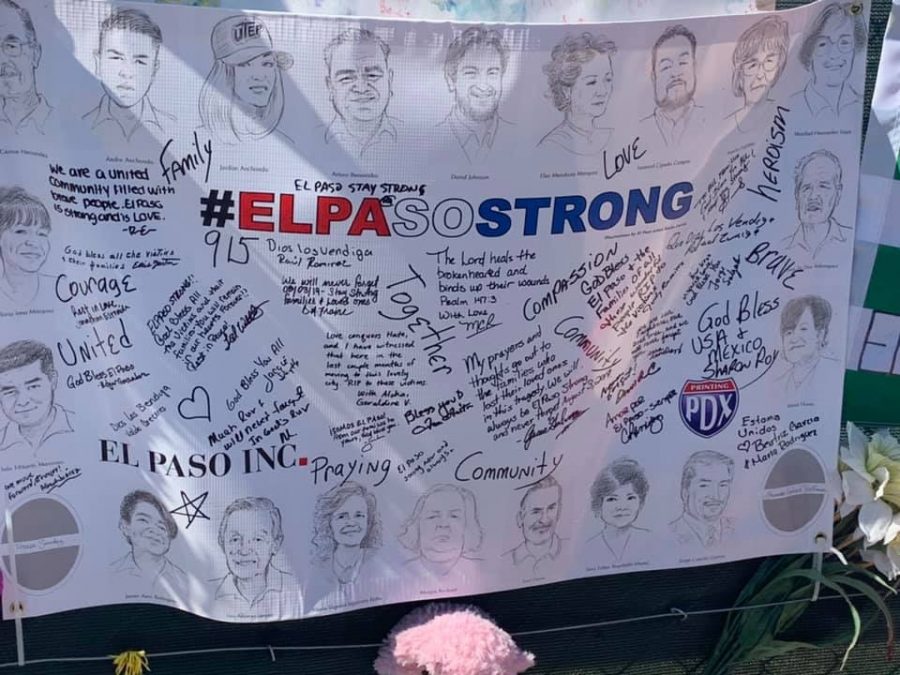 Outside of the Cielo Vista Walmart, El Pasoans and others from around the country built touching memorials for the 22 victims of the Aug. 3 mass shooting.

Before the gunshots rang out in the Cielo Vista Walmart, August 3, 2019 seemed like a typical Saturday morning. People in El Paso went about their ordinary lives. The city moved at a leisurely pace, tranquil and unafraid.

Then, at 10:39 A.M., the police received their first report of the attack, and a disaster ensued.

The incident, categorized as the seventh-deadliest mass shooting in United States history, left 22 dead and 24 wounded. US and Mexican citizens, along with one German citizen, had their lives cut short. They ranged in age from 15 to 90.

The city immediately unified in support of the victims. Blood donation facilities were overrun with donors and had to ask for them to schedule appointments for the next day. The El Paso Community Foundation and Paso Del Norte Foundation set up donation pages for the victims and their families, which have since raised $4.7 million. Nine funeral homes offered their services free of charge to those who passed in the shooting. Members of the community put together a large memorial near the Walmart and filled it to the brim with flowers, candles, crosses, flags, signs, pictures, and teddy bears. Many prayer services, vigils, and memorials were held. Antonio Basco, who has little family and whose wife died in the shooting, invited the public to Margie Reckard’s funeral, and over 700 people attended.

El Paso is recovering. The Sam’s Club next door to the shooting reopened its doors on August 24. The impacted Walmart is undergoing a full interior reconstruction and is expected to open in three or four months, Walmart spokesperson Randy Grove told KTSM. He added that a permanent memorial will be built at the location to honor those who died or were injured.

Now, people adjust to their new reality. Because of the interconnectedness of the Sun City, each El Pasoan has their own story about where they were when they received the news and how it affected them.

Junior Alondra Chavez remembers waking late in the day. Her mother was at a baby shower, and her dad was at work. Nothing seemed particularly unusual until she began reading text messages from her friends asking if she was safe and mentioning a shooting at Cielo Vista. She grew concerned because the baby shower was around ten minutes away from that Walmart.  She called her mom – who told her that her family was safe – and watched the news pour in for the remainder of the day.

Chavez felt utterly shocked by the incident. “You never really think that it would happen in your city, but obviously, it did, so there is now uneasiness in the air,” she said. “It is also hard to face the reality of the true motives of that cruel man and how far he went to fulfill his racist agenda.”

Still, her feelings about the city have not changed, and she feels that it is as safe as it has always been.

IB and AP English teacher Mrs. Penny Berry echoes a similar sentiment. “[In the] many, many years I’ve lived in El Paso, I have discovered that El Pasoans—with some exceptions—are usually very fair and kind people,” she said. “I realized, ultimately, it was imported cruelty; it was imported stupidity; it was imported—just, absolute evil—who did this.”

For Mrs. Berry, the incidents of August 3 took her back to August 1, 1966, when a gunman killed 14 people and wounded 31 at the University of Texas at Austin, a major university in the city from which she originates. Some of the people killed were even graduates of her high school. The University of Texas clock tower shooting was the first mass murder to be covered live, and it prompted the creation of Special Weapons and Tactics (SWAT) teams that would be used during the many mass shootings to come. It also prompted first responders and organizations to plan for similar events.

Laura Quintana works as an x-ray technician at the University Medical Center (UMC), where 13 victims were treated. Alongside many others, she was called into work. The hospital had practiced for such an occasion various times. “I’m really, really proud of how UMC was so organized and handled things so well and was so professional,” Quintana said.

Her most striking memories of that day? “How severe the injuries were,” she said.

Your correspondent served as a Junior Volunteer at UMC over the summer was able to see some of these injuries firsthand as well on the Monday after the shooting. It was an experience that will never fade from memory. What those patients conveyed, however, was not misery or despair but strength.

This is what #ElPasoStrong means: solidarity, love, courage, and resilience in the face of tragedy, violence, hate, and uncertainty.