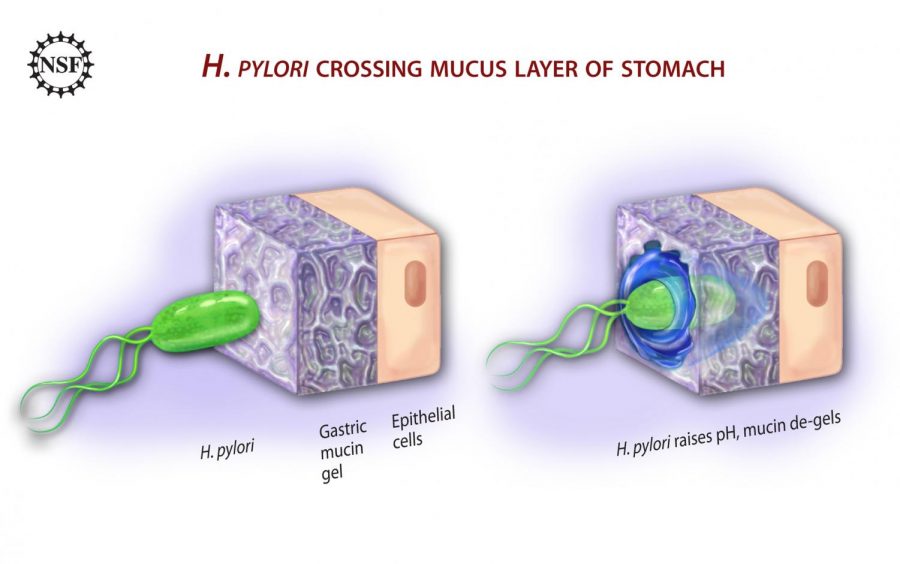 A visual of the bacterium, H. Pylori, and how it infiltrates the body and infects it.

Know the dangers of H. pylori

Everyone knows that it is good to schedule an annual checkup with your doctor, even though you may not have any health concerns. These checkups are meant to assure that your health is in tip-top shape and that there is nothing to worry about. Most of the time, we don’t know what these standard tests include. Something that is not common knowledge is helicobacter pylori (H. pylori), a bacterium that can cause cancer if not treated. Although it does not often cause cancer, people should be educated about the bacteria and the risk it poses.

H. pylori is a spiral-shaped bacterium that is found in the epithelial lining of the stomach. It causes 90% of duodenal ulcers and 80% of gastric ulcers. Before H. pylori was known to be a cause of ulcers, it was the belief that things like spicy food, stress, and acid were the main causes.

There was no cure other than medication meant to relieve the pain caused by the ulcers. Since it is now known that the main cause of ulcers is really H. pylori, the proper medication and antibiotics can be given. This reinforces the idea that if the common person were to be educated about this, they would be able to deal with any symptoms they suspect might be related with ulcers sooner.

Approximately 25 million Americans suffer from peptic ulcer disease at one point in their life.

The most common symptoms include: bloating, burping, nausea, lack of appetite, and weight loss without reason. Some more serious symptoms that indicating that the ulcer is bleeding into your stomach or intestines include: trouble breathing, dizziness or fainting, tired for no reason, pale skin, vomit with blood or something that looks like coffee grounds, and sharp stomach pains. The most serious symptoms that indicate the possibility of cancer include: belly swelling, nauseas, lack of appetite, heartburn, etc. These symptoms seem similar and because of that, certain tests are done to figure out the problem. Still, having an idea about what these can suggest may save a life.

The treatment for those with H. pylori is simple. It consists of 10 to 15 days of antibiotics, such as amoxicillin, tetracycline, metronidazole, or clarithromycin. There are eight treatment regiments that have been approved by the Food and Drug Administration (FDA). However, many more combinations have been used successfully.

Roughly 60% of Americans have this disease, and the solution for it is an easy one. The problem is awareness. There is so much that we are ignorant of. If we simply opened our minds and make an effort to learn, we will benefit.