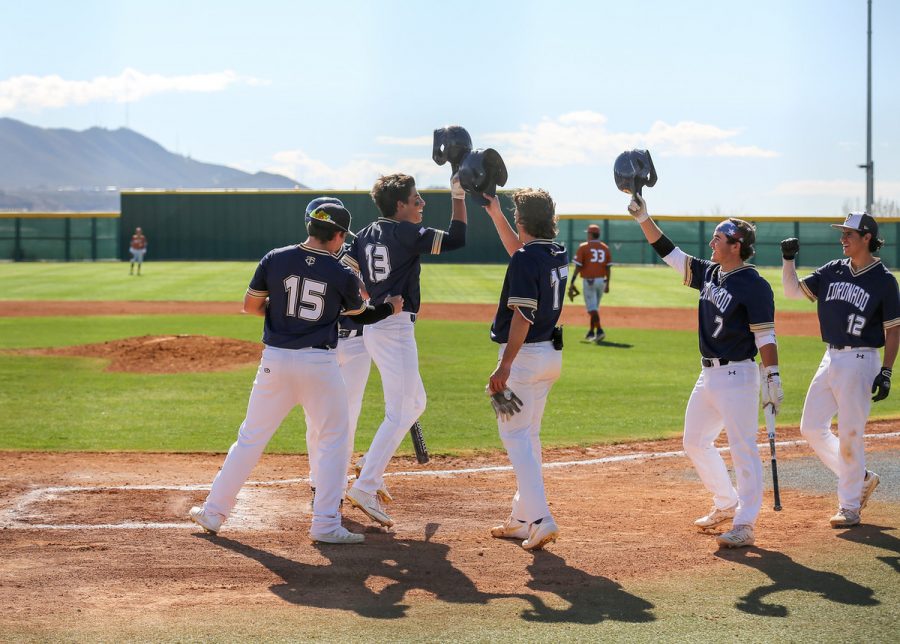 Team celebrates with senior Jorge Cuevas after he hits homerun earlier this year, prior to the canceling of the season.

As CIVUD-19 continues to spread, the University Interscholastic League (UIL) made the decision to officially cancel the remainder of spring sports for the 2019-2020 season.

This decision was based on Texas Governor Greg Abbott’s decision to keep all Texas schools closed for the remainder of the school year. In a press conference on April 17, Abbott made this announcement, as well as explaining his plans to slowly start opening up the state. However, with schools being officially canceled, UIL felt like they had no other choice.

UIL is the governing body for Texas public schools, which controls many of the extracurriculars found in high schools across the state. With this cancelation, there will not be a 2020 state championship for baseball, softball, track and field, soccer, golf, tennis, and boys’ basketball. Additionally, 5A and 6A will not be able to play in spring football practices.

UIL had been waiting as long as possible to make an announcement about the season, hoping that there could be a state championship at some point for the 2019-2020 season. Sadly, UIL made it official that seniors throughout Texas have competed in high school sports for the last time.

“Our staff has been working hard on plans to resume activities this spring, but without schools in session, interscholastic activities cannot continue,” UIL executive director Charles Breithaupt said in a news conference. “Our highest priority during this time is ensuring the safety of our students, and we are now turning our attention to the 2020-2021 school year.”

UIL has been following Abbott’s decisions in regard to the suspension of school activities. During spring break, March 13, UIL decided to pause all sanctioned events from March 16-29. When Abbott made the decision to shut down all schools until May 4, UIL followed by announcing an indefinite suspension of athletic and academic activities.

The decision to cancel all sports has no doubt hit the 2020 seniors the hardest. With practically four years of hard work and dedication down the drain due to the global pandemic, seniors are devastated.

“The season ending was definitely heartbreaking; knowing that I will never get to play baseball with any of my childhood friends is a tough pill to swallow,” senior and baseball player Mauricio Millan said. “However, I am very grateful for all the memories made on and off the field that I will cherish for a lifetime.”

The baseball team was on track to have an exceptional season, leading the 6A Region 1 District 1 standings with a 9-3 record. And with only six underclassmen on the roster, the seniors are being forced to say goodbye to more than just their season.

“The baseball team was like family, and we are truly devastated that it had to end like this,” Millan said.

The track and field season were also cut short due to the UIL’s decision. Track star Nick Gonzalez said he is grateful for the past seasons. However, he wished he could run one last time for the Thunderbirds. Gonzalez has competed at the Texas UIL cross country state championships for both his junior and senior seasons, and he was hoping to make state for track and field this season as well.

“I am devastated that, as a class ,we can never dress in blue and gold and play again for Coronado,” Gonzalez said. “But I am grateful for the time spent at Coronado, and I am positive for the future.”

In regards to next year’s season, players and coaches are remaining optimistic that the season will return as normal. Working out at home, athletes are still training for next year’s season even though the 2019-2020 has been officially canceled.

“We have been meeting with our coaches [on] Zoom, as well as working out at home in preparation for next season,” junior and football player Ivan Ortiz said.

As UIL decides to shut down all sports, it becomes part of the list of states that have already done the same. As of April 26, at least 38 other states have canceled high school sports. Decisions remain to be made about next year.