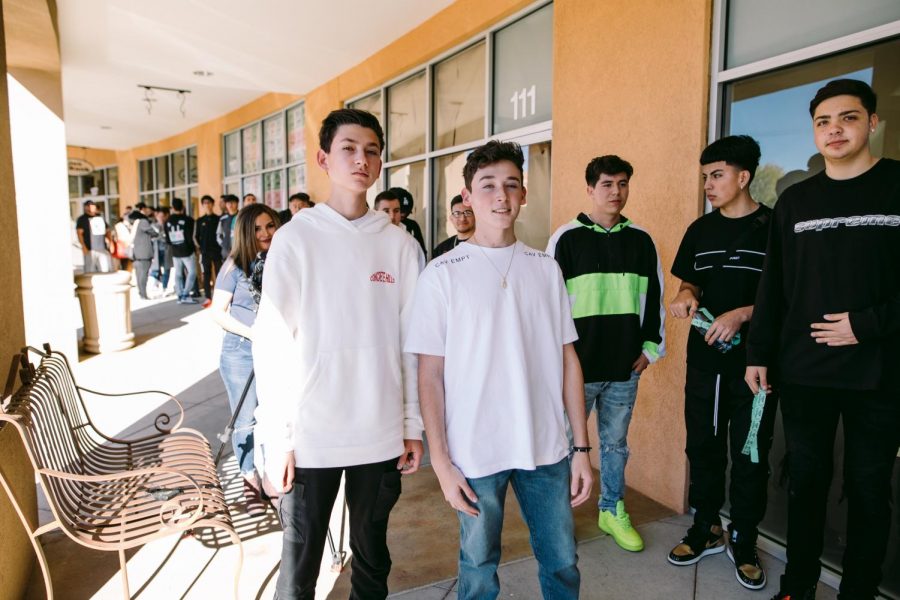 Drew (right) and Jamie Frank (left) stand in front of their store, Kickpin, which has a line of excited customers waiting to start shopping.

Editor’s note: This story was written in early spring and would have been published in the print issue “Never stop exploring.”

By the ages of 13 and 12, respectively, students Drew and Jamie frank had started their own business. Drew, now a junior, and Jamie, a current sophomore, started Kickpin, which sells limited edition and rare sneakers. In creating Kickpin, Drew and Jamie wanted to open up a store for El Pasoans to find their favorite sneakers. The brothers have been successful in carrying out their passion, and they have had many interesting experiences along the way.

When Drew was an eighth grader, he sought to accomplish his goal of becoming an entrepreneur and following in his grandfather’s footsteps. Now, he and Jamie sell a variety of brands in their store, including Nike, Jordan, and Adidas, as well as apparel with their brand name on it. Their company was founded in 2016, operating as a pop-up store that would open about once a month. It has grown since then, now boasting an online store and over 20,000 followers on Instagram. The Franks also created a brand called Concrete Hills, which sells sweatpants and sweatshirts and has attained a degree of national fame.

“It has been really cool to see how much Kickpin has grown,” Drew Frank said. “The biggest accomplishment I have gotten is probably all the celebrities that I have gotten to meet and [doors] that have opened for us.”

Their roles in Kickpin have given Drew and Jamie recognition in the social media world. They have met celebrities, like Lil Yachty, Billie Eilish, Khalid, Gunna, Kevin Hart, and DJ Khaled. Through these well-known contacts and hours of dedication to Kickpin, the Franks have been able to reach a bigger clientele and grow their business. Many celebrities have come to the store to shop, and others have invited the Franks to social events. The boys have also had their personal Instagram accounts grow tremendously: Drew has 20,000 followers, and Jamie has 12,000. On these accounts, the boys post to promote Kickpin or the famous people they have met through this company.

In spite of the success, not everything has come easily. Drew expressed that his age has created some obstacles – many businessmen do not take him seriously – but he feels it has only helped him mature. He is thankful for how far he and his brother have come. Jamie explained that operating Kickpin has become a smoother process over time.

“First, it was tough and was a lot of hard work, but since then, we’ve learned how to manage it and manage our schedules,” Jamie Frank said. “It has definitely all paid off.”

Drew and Jamie Frank’s store, Kickpin, is now a popular social spot among Coronado students. Through many years of planning and dedication, the Franks have become established entrepreneurs, and it all began by choosing to follow their passion.