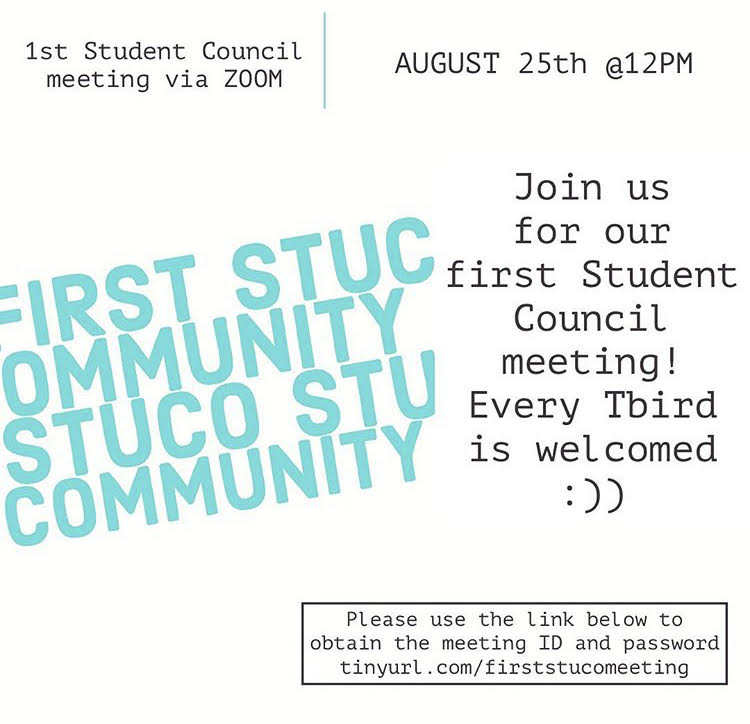 Student Council adapted to the virtual format by hosting their first meeting via Zoom this year.

Extracurriculars during the pandemic might seem a bit daunting, especially for freshmen who were hoping to join activities at Coronado this year. Nevertheless, T-Birds have been able to pull through once again, with a team effort by Student Council to organize a virtual meeting.

Student Council had a general meeting on Zoom before moving into breakout rooms.

Angelica Serna, a freshman and a new member of Student Council, echoed this sentiment.

“It was fun and the StuCo members really tried to include everyone,” Serna said.

Despite concerns about the excess screen time that virtual extracurriculars necessitate, she feels that the benefits of being able to stay and work from the comfort of home evened things out.

Vice President Felix Venegas acknowledged that the transition to a virtual environment has been somewhat complex. Traditionally, Student Council has been mainly a hands-on activity (one of the main projects of Student Council was playing bingo with the seniors at the center nearby).

“Fortunately, virtual school in no way limits our creativity,” Venegas said. “We believe that it’s still possible to enact a community of involved students.”

Venegas added that students can do environmental projects in their backyard or send supportive messages to teachers.

Basurto, Serna, and Venegas all agree that the virtual nature of extracurriculars has ensured continued engagement from Student Council members. As the year goes on, it is uncertain how the guidelines of our virtual classroom will change, but T-Birds will definitely be ready to face it head-on.