A spoiler-free review of the latest stage-to-screen adaptation 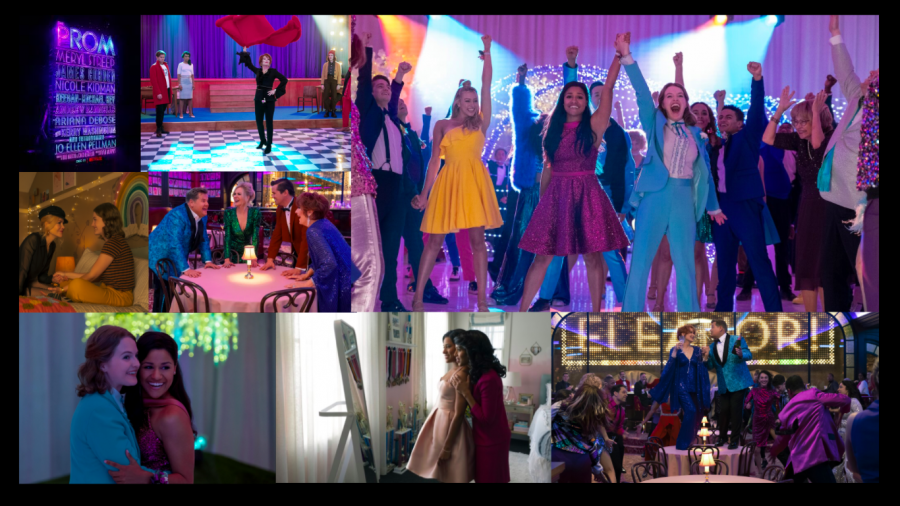 Even the colors alone convey that 'The Prom' is a massive celebration. The film brings out a whirlwind of emotions, laughter, and optimism.

If you feel like joy and hope are in short supply right now, don’t worry: Ryan Murphy’s The Prom has you covered. Adapted from Chad Beguelin, Bob Martin, and Matthew Sklar’s Tony-nominated Broadway musical of the same name, the film is infused with a star-studded cast, bold and touching musical numbers, showstopping sets and lighting, and, at the center of it all, a celebration of identity and love.

Though the movie itself may deliver bursts of bliss (with some heartbreaking moments mixed in), life is far from magnificent for the main characters as the story begins. In a small town in Indiana, high school student Emma Nolan (Jo Ellen Pellman) just wants to attend prom with her closeted girlfriend, Alyssa Greene (Ariana DeBose). Emma has the support of Principal Tom Hawkins (Keegan-Michael Key), but the PTA – headed by Alyssa’s close-minded mother, Mrs. Greene (Kerry Washington) – decides to cancel the event rather than let Emma bring her date. Meanwhile, after their new musical closes on opening night with an avalanche of negative – and mainly personal – reviews, self-centered Broadway icons Dee Dee Allen (Meryl Streep) and Barry Glickman (James Corden) look to improve their reputations by contributing to a cause. Joined by Angie Dickinson (Nicole Kidman), a longtime member of the chorus who dreams of a starring role, and Trent Oliver (Andrew Rannells), a pretentious Juilliard graduate who wants to be known for more than his role on a sitcom, the actors set off for Edgewater to get involved in Emma’s situation, get some good publicity, and, as Dee Dee phrases it, “raise holy hell.”

I’m sure at least a handful of people read the cast list and immediately added The Prom to their Netflix list, and for good reason: talent is thought to run through these actors’ veins. Fortunately, they do not disappoint. Streep sells Dee Dee’s diva personality and belts challenging songs effortlessly. When Corden isn’t drawing out a laugh from audiences with witty or snarky remarks, he’s bringing tears to their eyes as he recounts Barry’s painful backstory. Kidman is positively charming as Angie, and her scenes with Pellman in particular are some of the most stirring in the film. Rannells, a real-life Broadway star, dances with unparalleled agility, sings expertly, and makes Trent an endearing presence throughout. Even without a major character arc for Mr. Hawkins, Key brings an optimistic-yet-levelheaded perspective to the story. Washington fleshes out Mrs. Greene to be more than an angry, prejudiced antagonist: she brings a profoundly human side to her that enriches the movie all the more.

Although not as well-known to mainstream audiences, Pellman and DeBose truly shine in this musical. This is Pellman’s first major movie, but you would probably never guess it. Her scenes range from exuberant to poignant, yet she captures each emotion so flawlessly – and inspires such awe with her voice – that is abundantly clear why she was chosen to bring Emma to the big screen. DeBose might be recognized for her Broadway credits like the Bullet in Hamilton and Disco Donna in Summer or her role in the upcoming adaptation of West Side Story as Anita; she also made Forbes’ 30 under 30 list this year.  Though well out of high school herself, she skillfully taps into the mindset of a frightened, overachieving teenager who is deeply in love. Alyssa may be Emma’s love interest, but DeBose does not let audiences forget she is a complex, passionate character in her own right. Because of the actresses’ performances and the undeniable chemistry they bring to their scenes, it is impossible not to root for the central couple.

Even with the talent involved, The Prom would not be what it is without its soundtrack, comprised of songs inspired by classic musical theatre and contemporary styles alike. Sklar and Beguelin both wrote the music for the Broadway show and worked on the film, so the magic is not lost in the transformation from stage to screen. Songs like “Tonight Belongs to You” and “Love Thy Neighbor” pack comedic lines into catchy tunes, others like “Alyssa Greene” and “Unruly Heart” deliver powerful messages through more low-key songs, and some, like “Just Breathe” and “Zazz” strike an outstanding balance between both. Much like Trent peppering Juilliard into nearly every conversation, you will not be able to stop talking about this music.

One limitation that the Broadway version faced was restrictions on what types of sets could be constructed. The film makes use of the lack of this obstacle. Scenes take place in a swimming pool, in an empty lane with pink blossom-covered trees, at a monster truck rally, and in a mall, to name a few. The glamorous stretch of Broadway shown at the opening of the film, arguably the most dazzling set, is more impressive when you learn that it was, in reality, a replica in Los Angeles that took over six months to build. Just as music transcends normal speech, the sets transport characters from ordinary moments to minutes of grand possibilities or memories from the past, often reinforced by purple, pink, blue, or green lighting. The brilliant colors on their own communicate the tone of the film.

Even with success in so many other areas, The Prom falls short in some regards. The movie begins in medias res, as Mrs. Greene explains to reporters why the prom was canceled and a hopeless-looking Emma is pressed to comment on the decision. Though not a fault on its own, little is known about the events that transpired before this scene. How did the PTA become aware of Emma’s intentions to bring her girlfriend?  And how did Emma and Alyssa’s relationship start in the first place? These questions and others remain unanswered. Angie’s and Trent’s backstories are barely touched upon, though certain new characters create a better understanding of other central figures. Publicist Sheldon Saperstein (Kevin Chamberlin) is introduced and then virtually forgotten for most of the film. Some instances of character development seem to happen at an unnaturally fast pace. Fans of the original Broadway cast recording might be disappointed to find that a few verses were cut from the movie. But, by the time the end credits roll, these imperfections can be overlooked in light of everything that The Prom does right.

The film is a heartwarming, tender, triumphant, hilarious, and boisterous story about bridging divides and embracing yourself and others, complete with visually stunning elements and a soundtrack that encapsulates a wide range of emotions. It can be a tale that generates positive social change, a source of hope for LGBTQ+ individuals, or simply an escape. In the end, The Prom may be a small dose of exactly what this world needs.