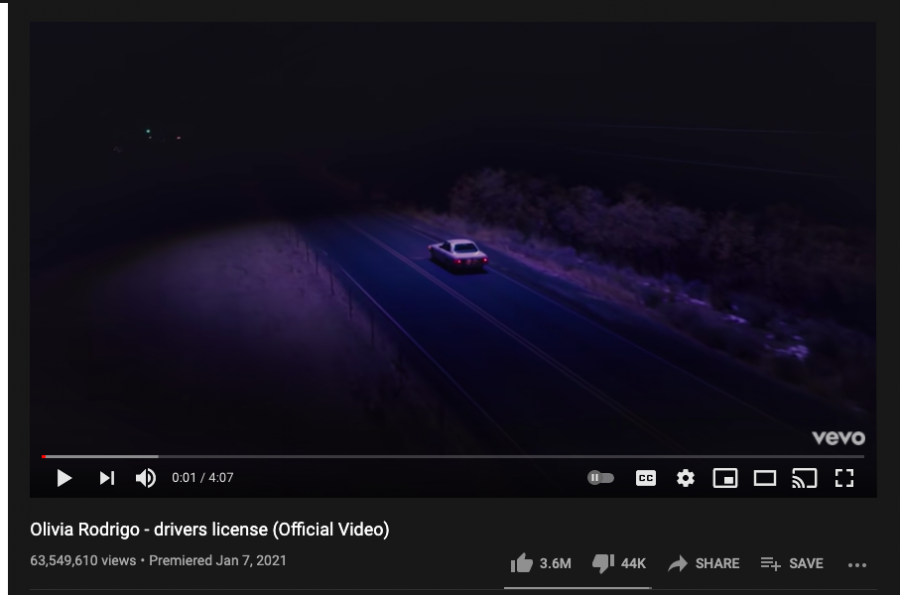 “drivers license” has seen a huge amount of popularity. Since being released on Jan. 8 (at midnight in Eastern time), it has received over 63 million views on YouTube, in addition to the millions of streams on other platforms. The music video features stunning visuals, especially of driving.

After being released on Jan. 8, Rodrigo’s song has broken the Spotify record for “most streams of a song in a single week.” And, according to Spotify’s global weekly Top 200 chart, it was streamed 65,873,080 times during the week ending on Jan. 14.

The hit song also broke the record for “the biggest first week streaming debut ever globally” on Amazon Music.

As of Jan. 17, Apple has announced it is currently the most played song on Apple Music worldwide.

The song has been the latest TikTok obsession, with many using the audios to create new content on the social media platform, like rewriting it from another perspective.

The pop ballad expresses the grief of teenage heartbreak, a grief that perhaps resonates deeply with its young listeners.

“I really liked the song because you could hear how vulnerable Olivia was,” senior Caitlin Robinson said. “It felt really relatable.”

The 17-year-old’s debut song has become popular for its emotional impact, which has left room for speculation as to who the song is about. Some TikTok users suspect the song is about Rodrigo’s rumored ex-boyfriend and current “High School Musical: The Musical: The Series” co-star, Joshua Bassett.

The streams of her latest song do not seem to be slowing down. Whomever “drivers license” is about, it latches onto the hearts of its listeners who may have someone special in mind. Rodrigo’s success points to a huge star in the making, as she seems to have left an enormous impression behind with just one song.