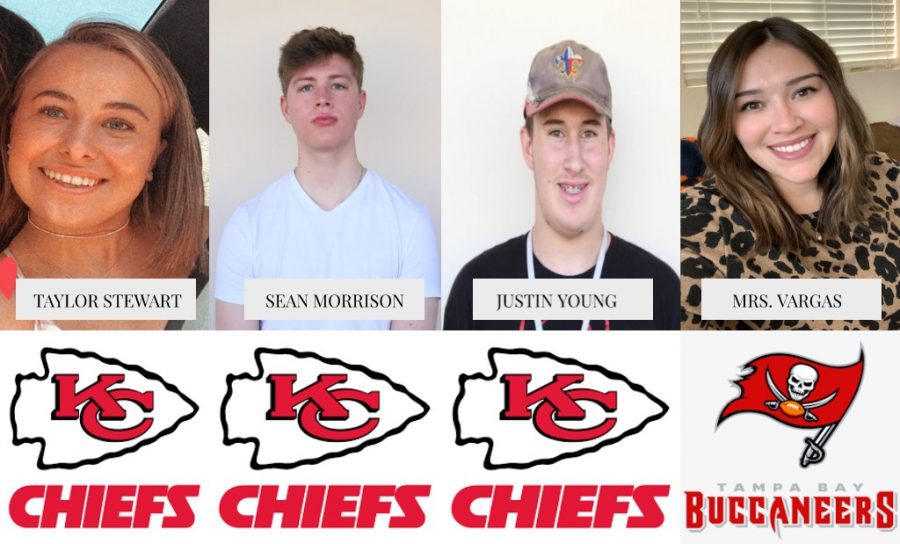 The Explorer sports staff predicts who will win Super Bowl LV, which will take place on Feb. 7.

Three-time MVP quarterback Tom Brady and the Tampa Bay Buccaneers will take on rising star Patrick Mahomes and the Kansas City Chiefs in what could be Tom Brady’s last game ever.

Super Bowl LV will take place on Feb. 7 at Raymond James Stadium in Tampa, Florida as the last game in a season that battled challenges presented by COVID-19. As a result, the fan attendance will be limited, but the Bucs might have a coincidental home-field advantage.

The site for a Super Bowl is usually planned a few years ahead of time, so it is purely coincidental that Tampa Bay will play at their home-field. Brady and the Bucs were an underwhelming 5-3 at home, while holding a 6-2 record away. At the opposite end, the Chiefs went undefeated in away games this season at 8-0, going 6-2 at home.

Approximately 25,000 fans will be allowed into Raymond James Stadium on Sunday, which is more than either team is accustomed to, meaning their home and away records don’t hold as much significance. All in all, the Bucs have a huge advantage being able to have home-field because the Chiefs just are not used to playing away at this large of a crowd anymore.

In the previous round, the Bucs went up against the Green Bay Packers, with Brady throwing for 280 yards and three touchdowns but throwing three interceptions for a 73.8 rating. This season has seen Brady throwing for 4,633 yards, 40 touchdowns, and a 102.2 QB rating, which is still an above-average year compared to his other 20 seasons in the NFL.

Patrick Mahomes is in just his third season but has already won a Super Bowl, a Super Bowl MVP, and an NFL MVP award, leading many to already consider him one of the greatest quarterbacks of all time.

His lone Super Bowl win came last year against the San Francisco 49ers, in which Mahomes was able to down the 49ers impressive defensive front which included Nick Bosa, Sheldon Day, DeForest Buckner, Arik Armstead and defensive studs LB Kwon Alexander and CB Richard Sherman in a game ending with a score of 31-20.

According to ProFootballReference, the Bucs currently have the eighth best defense in the league, while Kansas City sits at eleventh.

The trajectory of the game will come down to whose offense performs the best, specifically at the quarterback position. Both quarterbacks have numerous offensive weapons: Brady having receivers Mike Evans and Chris Godwin to throw to, as well as tight end Rob Gronkowski and Mahomes having receivers Tyreek Hill and Mecole Hardman and tight end Travis Kelce.

Both teams will also look to their run game for offensive leverage. Chiefs rookie Clyde Edwards-Helaire has been solid this season, rushing for 803 yards and four touchdowns. The Bucs have Ronald Jones at running back, who ran for 978 yards and seven touchdowns.

Tamba Bay definitely has the edge in terms of experience, and they even have home-field advantage, both key factors in winning the game. As long as Brady shows up, which is very likely, the Bucs may have the win, but if Mahomes plays better than he ever has and the Chiefs defense comes to play, the Chiefs have it.