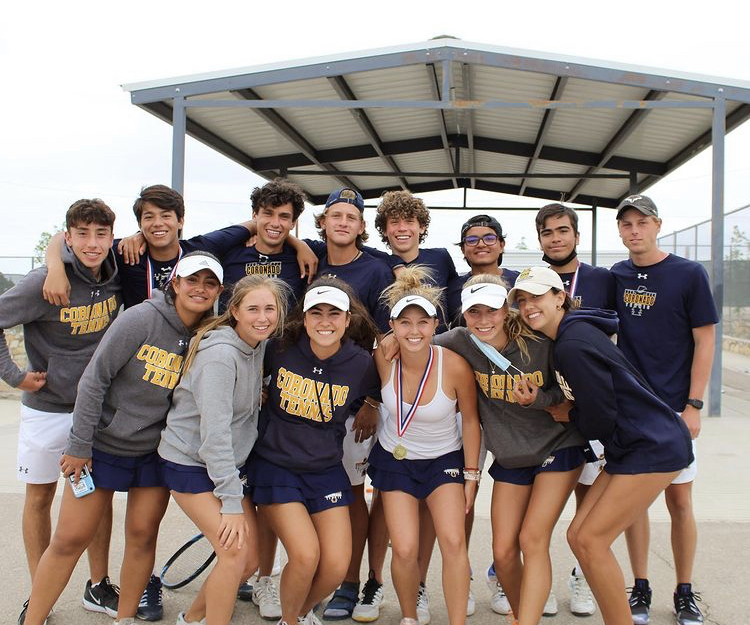 Members of the tennis team celebrate after finishing their district matches.

The tennis team earned its 26th consecutive district title this year, and 11 T-Birds qualified for regionals. After playing several district matches at the school and at Franklin High School, the regional qualifiers are ready to take on the Region One Tennis Tournament in Arlington, Texas on April 27-28.

Among these qualifiers is junior Naomi Katz, who won district for girls’ singles without losing a single game. Jordan Katz, a senior, and Sebastian Herrera, a junior, won district in boys’ doubles; they also have an undefeated record this school year.

“I’m proud of all the T-Bird tennis players for showing that a tough year doesn’t hold us back,” Jordan Katz said.

“We worked really hard for the district title,” Gilcrease said. “I’m excited to see what’s to come and what regionals will bring for us.”

All the tennis players contributed to the continuation of Coronado High School’s district title. The varsity tennis team has been training since August, and their hard work will pay off as they get to represent Coronado in Arlington.

The 11 T-Bird tennis players will head to the Region One Tennis Tournament to play on Tuesday and Wednesday. They will compete against students from high schools such as Coppell, Southlake Carrol, Plano West and four others.