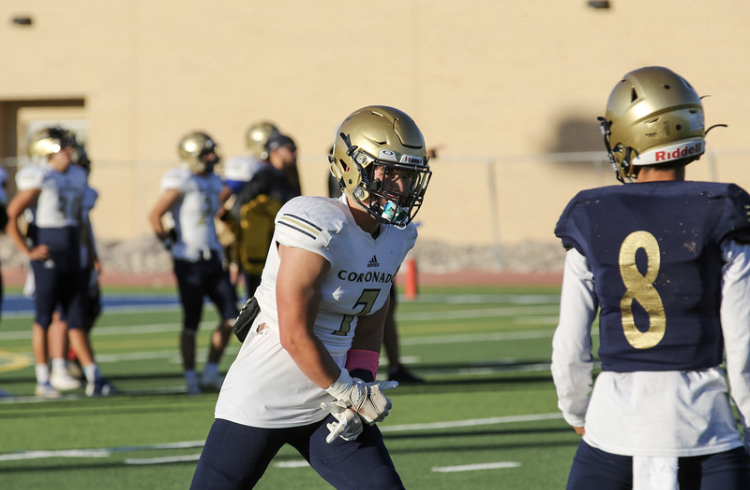 Wells has been on the team for four years and his commitment to football is unwavering.

There have been many talented and hardworking players to pass through the varsity football scene and Ethan Wells happens to be one of them.

Ethan Wells is a senior wide receiver who has played all four years for the team. He has been a cornerstone of the team and has proved to be an electrifying leader in the locker room.

“Ethan has always been a guy who’s keeping the team energetic and holding others accountable, it’s awesome being able to share the field and compete alongside him,” said junior wide receiver Cade Litte.

Many of Wells’ teammates can attest to his committed work ethic and driven attitude to win. Over the course of his tenure, Wells has recorded 10 touchdown receptions, accumulating close to 1,000 offensive yards, and has never had a turnover.

However, stats are not what Wells uses to measure success; he prefers winning a lot more.

“I mean I think everybody would love to put up crazy stats, but honestly I would rather not play a game and win than put up incredible numbers and lose,” Wells said. He’s demonstrated a clear mindset that he will take a win even if it means him not getting involved in the offense.

Although he is a great leader on the field, he has the same impact on others off the field.

“I’ve known Ethan for my entire life almost, and he’s always had a passion for football and a desire to succeed in it,” said childhood friend Sabrina Erler. Wells has always shown unwavering loyalty, a desire to win, and a willingness to improve both others and himself, even from a young age.

The question that needs to be answered is, what is next for the star receiver?

“I have some opportunities to play in college, but I don’t know what the future holds, injuries have set me back, so hopefully I’ll be able to get back on track, but we will see what happens,” Wells said.

Wells has been in communication with several Division 2 and 3 colleges such as Concordia University – Chicago, University of Texas – Permian Basin, and University of Arkansas at Monticello.

Wherever Wells decides to go, it is guaranteed that he will make an impact and inspire others, just as he has done here.

While the future is uncertain, one thing is for sure, Ethan Wells has transcended what it means to be more than just a player.